If there’s one thing that’s stable AND good in this world – it would be retro videogames. And the modern take on the timeless fun: neo-retro games. With them even a shiny new iPhone/iPad with a controller can deliver you that thrill from childhood, without having to hunt for the rare and expensive retro hardware.

As you might have guessed – we’re about to talk about the creation secrets of the neo-retro masterpieces by Locomalito and Gryzor87, that we’re honored to have published digitally and physically. Super Hydorah just got a Collector’s Edition Switch release!

A lot of you asked us to shed more light on how neo-retro  games are created. So we asked Locomalito directly! 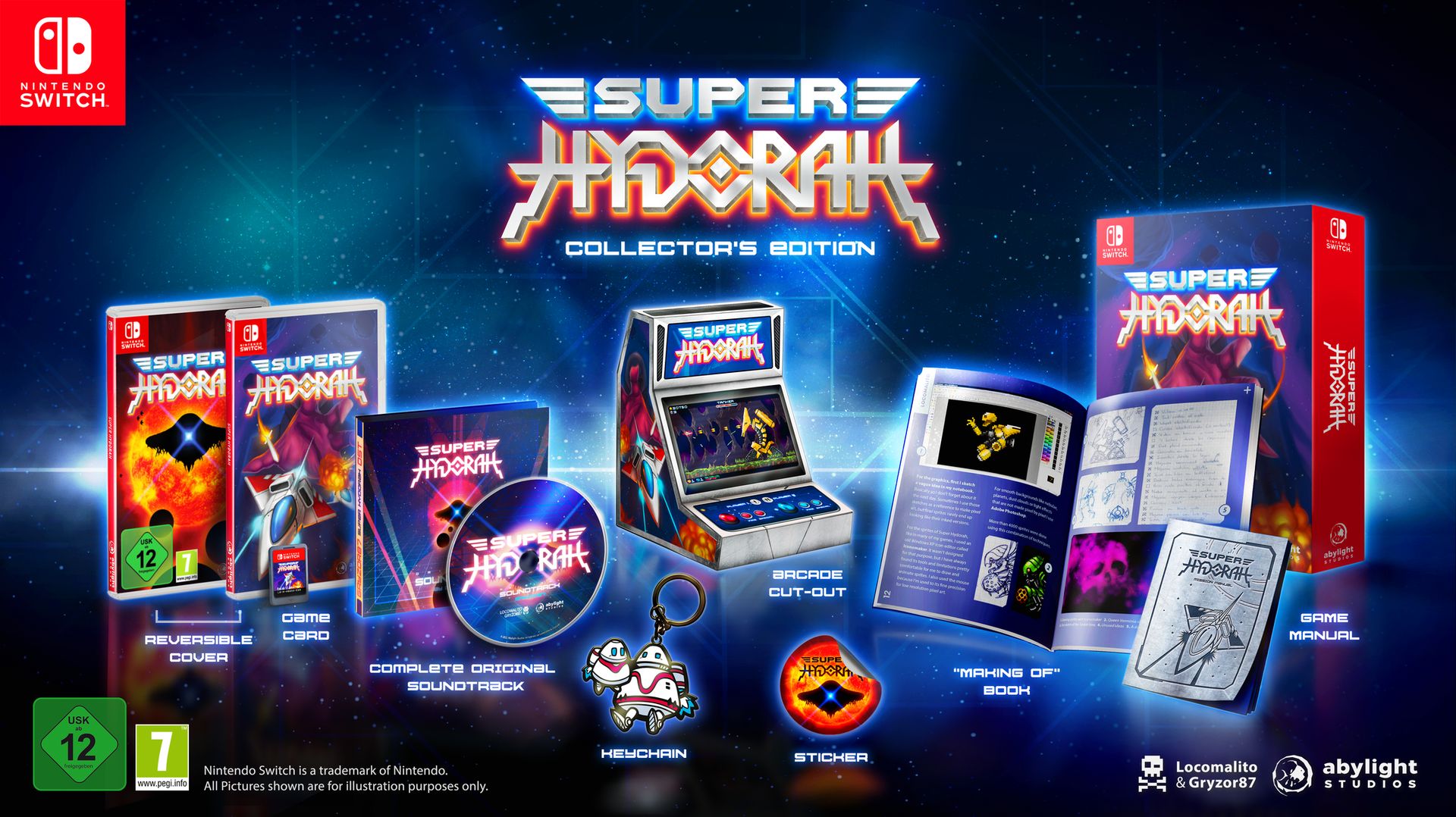 Locomalito: The first thing both Gryzor87 and I do is learn about the specific technical limitations of the retro system we want to mimic: screen resolution, color palette, number of simultaneous colors, how many colors per tile or sprite can be used, what’s the size of tiles and sprites, how many sprites can it show at once, what’s the sound chip, how many sound channels are allowed, what kind of sound channels (FM, square, triangle, noise, samples…) And once the research is done, the rest is a matter of using the regular development tools but minding and fitting those limitations.

Locomalito: “Neo-retro” is all about working with the cool limitations of the old days while getting rid of the limitations that are not that nice :-). Inside the retro scene, we use “retro games” to refer to games that are made with modern or older tools to run on older platforms, and then,”neo-retro games” we call those made with modern tools to run on modern platforms. For example, with an 8-bit looking neo-retro games what we have is a non 8-bit game that looks like an 8-bit one. It’s basically an aesthetical appropriation. Pick apart the classics “I love how game design was built in 80s and 90s arcade room games. Those games were specifically designed to please the player with the most awesome content in the smaller possible amount of time”, Locomalito recalls. “That means that every second of an arcade game is very polished in terms of design and content, not only to be interesting during the first play, but for the second, third, and so on… When you remove every boring or slow part of a game, of course you have a shorter game, but also a very pleasant to play and replayable one.

“I like how arcade games are always filled with action: every second you have an enemy to fight, a bonus to take, a trap to avoid, a time limit, a voluntary risk for a nice reward… They work like that regardless of being action games, platform games, puzzle games, racing games… It’s like a language of instant video game action”.

Locomalito: The first one for me is coherence. Once the aesthetic is set, the entire game must respect those rules. For example: if a game doesn’t make use of complex sprite rotation and has a wheel rolling at some point, then I have to draw the rotation of the wheel frame by frame instead of coding a regular sprite rotation.

The second thing is rhythm. If I get bored and want to skip some parts while testing my own game, that means the game is boring and needs some fixes. If the game is interesting in terms of rhythm and gameplay, you should never feel like you want to skip a level. For that reason I try to make every sub-level unique and short.

The third one is fairness. While I make action games that are challenging by definition, I try my best to make the difficulty as fair as possible. To achieve that I focus on coding a correct response of the controls, giving the player enough time to see a danger before it’s too late to avoid it, leaving the player room to learn enemy patterns and rewarding progress and risk taking with items and bonuses. 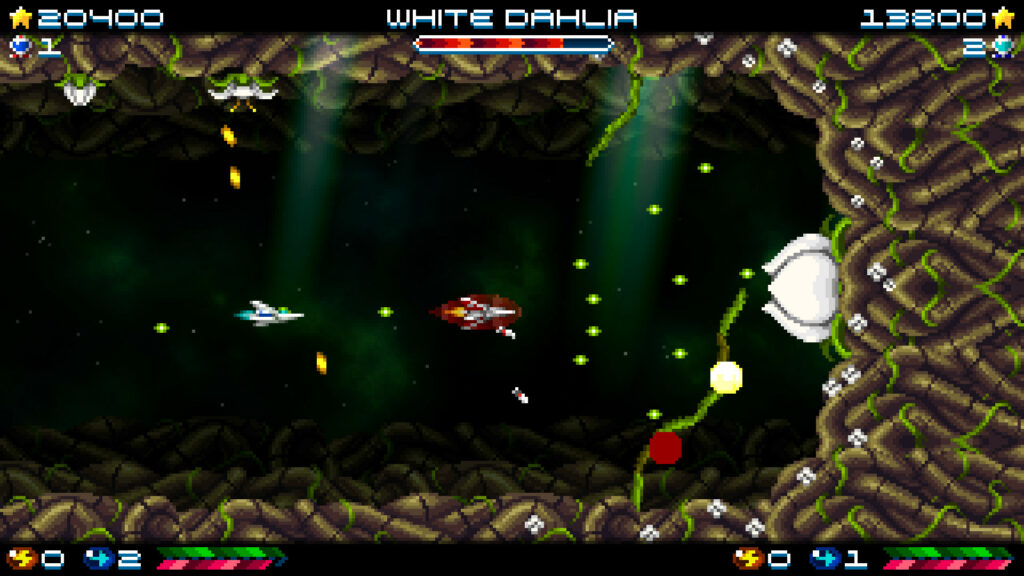 Locomalito: I don’t usually think of characters in terms of retro or modern. I mean, if I have to make a guy from Medieval Spain or from Ancient Greece, what I try to do is just take what I can find in history, and code it in a visual way that fits the game aesthetic.

Since I was a kid I’ve been enjoying movies and media of my own times and much older, so I’m very open to thinking about things in terms of style instead of era. Like, you know, 50s movie style is black and white, a specific kind of lighting, sound, acting, special effects, film grain… and I think of it as 50s style for both movies made in the 50s and movies made in 2020 with that style. That said, you can easily see that the characters in my games are not deep at all. I want them to fit, but in the end they’re just part of the atrezzo for the game feel!”

Who sets the limitations? Devs!

Locomalito: One thing that gives me a lot of headache is how modern monitors show pixels. In modern monitors a pixel is presented as a perfectly shaped square of a single color, but in older CRT monitors, they were shown through a mess of tiny red, green and blue lights. Those little lights generated interesting interaction between pixels of different luminance, making the image soft and warm, and turning certain pixel art techniques into interesting textures (I’m looking at you, dithering)!

To achieve that on a modern computer, you need to use shaders that are very complex to code, and a screen resolution that can be up to 10 times the natural resolution of the game.

So, basically you need a very powerful modern PC to show retro games in a way that really look like actual retro games.

Locomalito: Yes. The set of rules depends on the kind of game you want to achieve. For example, Maldita Castilla (Cursed Castilla) was made like an arcade game from 1985-1987, so it has an audiovisual style based on the screen resolution, palette, sound chip that you can find in the arcades of that era. Keep in mind that most arcade games are also their own unique platform. Then, while not exactly, Super Hydorah is made around Playstation 1 or Sega Saturn characteristics, and The Curse of Issyos around 8 bit consoles like the NES or the Master System II. 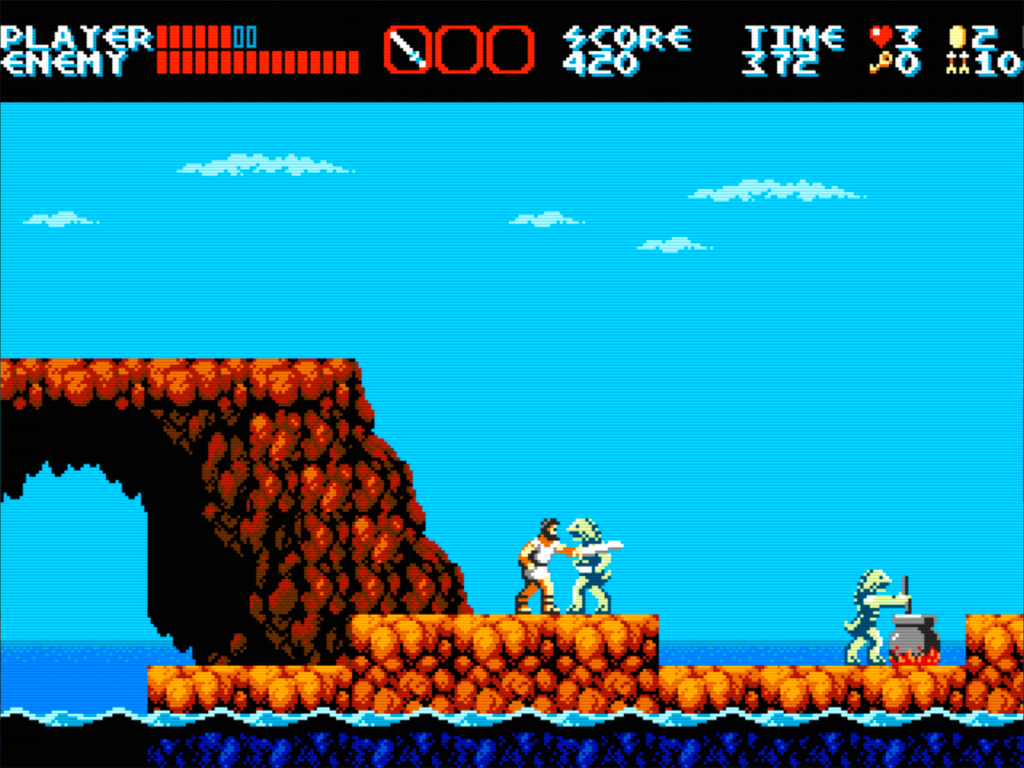 The Curse of Issyos: now on iOS!

Locomalito: I think you have to put nostalgia feelings aside, so you can separate what’s good from the old games and what needs some fixes to work today. In order to make a nice neo-retro game I think you have to study classic games, modern games, and a lot of things that are not games at all. With an open mind to everything, you can work on any idea and make it retro for a timeless look.

One thing that is very interesting is to read players’ comments about the classics you’re taking as a reference. If people hated something about a very popular classic, don’t mimic that, learn about the issue and try to do it better.

I’m actually working on a game based on a bunch of not so popular games that could’ve been greater titles, so I’m spending more time studying what was wrong than what was fine, haha!

As for  mistakes… Keep in mind that modern platforms require some special features, like a link to personal accounts, configuration menus and stuff like that. It’s good to design a game having in mind those new features that were not present in the classics, because otherwise they’ll feel like an ugly patch that has been placed later.

As a kid I spend a lot of time playing those systems, and also, as a dev I regularly play games and watch longplay videos of the platforms I’m imitating to learn about how devs of that era take the most out of their strict limitations. In that process I end up internalizing the style and learning what can be and what can’t be done. There are no real technical borders, so there’s room for mistakes such as placing 5 colors into a 4 colors tile. You have to keep your eyes open while working like that, but it can be done. It’s like using only 4 crayons out of a 12 crayons box (more or less, haha). There’s no easy-to-use tool to verify you’ve done it right, so it’s all on your side.

That said, the thing in neo-retro is that you are not forced to be 100% strict, so you have some room to break the rules and use one extra color or too many sprites at once. But then of course, breaking many rules means breaking the consistency and the retro feel, so it has to be done carefully.

Now that you know his secret, you must experience his work by yourself! Don’t miss out on Super Hydorah Collector’s Edition for Nintendo Switch, the ultimate physical release of his childhood dream.

You can also play it on Steam, PlayStation and iOS devices!

And if sci-fi is not your thing… how about a trip through ancient Greece or Spanish folklore?

Check out Locomalito’s past work and future projects on his website.