A room almost completely dark, only lit by the screens of arcade machines placed in a series of rows. The sound of the machines get mixed with the noise of coins and the bustle of children that clump around them.

Among those children, there is a child from Málaga who does not take his eyes off one in particular. In it, large spaceships are fighting against giant birds. This is the beginning of his long live passion for shoot ’em ups.

After that one, came many more: R-Type, Gradius, Side Arms, Darius, Salamander … In each of them the boy was studying carefully and absorbing a little more of these classics.

Years later, all this passion was sublimated in Super Hydorah, a non-linear shmup where the player faces the threat of the Meroptians.

Today, we will talk about the main influences and references that inspired Locomalito , the Spanish developer who grew up dreaming about creating his own shoot’em up.

From the myth to the fan

A lot of people agree when we say that the shmup created by ​Locomalito is at the same level of the greatest games of the shoot’em up genre, such as Darius, R-Type or Gradius. Still, Super Hydorah goes much further. Locomalito has chosen the best of the shoot’em ups between a wide variety of both retro and modern shmups to create a game that sublimates the evolution of the genre, linked in with the history of video games since he began with them.

Locomalito chose great sagas such as Darius and R-Type to design the levels set right in the  space, the maps in which we go into caves or even the parts where we fight on the surface of a planet or directly inside a large ship.

Regarding the locations and the maps, the game reflects a clear inspiration in the Gradius saga, with its exotic environments: tropical surroundings, including giant plants and even planets of ice and fire among other elements. Few sagas have managed to show such interesting scenarios, each with different mechanics that awakens the curiosity for the player to know what will come next.

In relation to the mechanical details and the environment of some levels, Super Hydorah takes Turrican and other projects made by Manfred Trenz as example, since Manfred’s retro games are plenty of bio-mechanical beings.

The design of the spaceships and other elements can remind us of Scramble or Hydefos. The position of the spaceships transmits to us the sensation of distance while we are focusing in the action. By including other types of elements, such as small buildings or trees, we capture their proportion with the rest of the world, enemies and bosses.

The dimension of the spaceships is very important in Super Hydorah, because there are a lot of battles with disproportionately large ships. Locomalito wanted these large ships to fully occupy the screen, such as the one we find at the Galactic Inferno level.

One objective, many roads

About the route selection, Darius and Outrun were both the key references for Super Hydorah. Just one initial level, but a wide variety of finals depending on which route is chosen.

This multi-phase system with a plurality of finals, it can give the feeling to a part of the public that it lacks a great final, but in Super Hydorah it does not happen like that, since there is that great end to which the player will arrive after overcoming certain objectives.

About its weapons and secrets

The selection weapons system which we find in the classic Megaman or R-Type, gave fruit to what has been the final result of the weapon variety of Super Hydorah. Before starting a level, we are presented with the option to choose from the arsenal and combine a secondary weapon with a main one. The mystery which faces the new player is to select those weapons properly when he does not know what he is going to confront. Having not played that level before, the decision itself is a challenge.

On the other hand, in Super Hydorah there are also secrets and hidden areas. Here the references are taken from great classics such as Castlevania or The Maze of Galious.

In addition to these secrets, there are objects that unlock new elements if they are used in certain areas, this feature is given by the RPG action genre. A novelty that has been implemented in this shoot’em up.

The latest Super Hydorah references take us away from video games and transport us to the Anime series of the 70s and 80s, such as Ulysses 31, Captain Harlock and Macross; science fiction technicolor films, such as Star Crash; and the science fiction magazine of the ’50s, Amazing Stories. All these references share that the main character lives in a spaceship or undertakes space adventures in each chapter. Each of them inspires in a special way the creation process of Super Hydorah, providing a unique and characteristic touch.

The synthesizer and the retrofuturist sound.

The icing on the cake that is the experience of playing Super Hydorah, is put on by the acclaimed original soundtrack created by Gryzor87, who will help us present their influences.

For those who have musical concerns, comment that it has been used models of real synthesizers such as Korg TR-Rack or 05R / W, in addition to virtual models such as Jupiter 8V, Hypersonic2, FM7, FM8, among others. Moreover, the sound of a replica of a 1622 virgin muselar, built by Gryzor himself, was directly recorded. You can listen to this instrument in later stages.

The intention was to add a modern touch with hindsight to the classic roots of science fiction and the arcade machines of shoot’em up. Next, the mentioned references:

“Stone by stone, they raised a castle…”

Beyond the creative processes or the references chosen to create their games, the most important thing for Locomalito and Gryzor87 is constancy. Each day dedicate some time to the project, establish a habit to create the dreamed game. 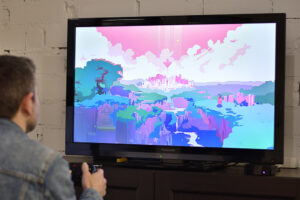 Hyper Light Drifter at 120 fps, a new way to play! 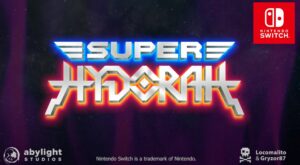 Super Hydorah has a release date on Nintendo Switch, finally! 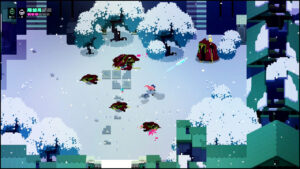